Prepping for my first trip to Davos

I'll be a noob amid the leaders, decision-makers, and innovators that flock to ski village every January.

I’ve been fortunate over the years to be involved in some pretty bizarre and random projects, like traveling around China for a Business Traveler television show, serving as a Simon Cowell-style judge on a Chinese version of The Voice, or personally escorting (now Presidential candidate) Mike Bloomberg for part of his visit to Hong Kong many years ago. Never, in my wildest dreams, would I ever have imaged doing any of those three things.

Now, I can add a fourth: attending the World Economic Forum in Davos, Switzerland.

So many things occur in life by complete happenstance, or simply by being in the right place at the right time. I was lucky to get involved with WEF back in 2008 after several stars magically aligned.

I used to write a blog about China when I lived in Beijing in 2007 and 2008; that led me to reading more blogs about China; which lead me to the absolutely excellent Imagethief blog. The witty writer behind it, Will Moss, and I ended up connecting by email back then, but still have never met in real life — we just happened to be two foreigners blogging about China at the same time.

Fortunately for me, Will happened to be connected to WEF through one of his friends. That friend told Will he couldn’t attend the forum that year, so asked Will to do it instead. Again, fortunately for me, he couldn’t! So Will emailed me – a guy he’d never met and barely knew – to offer it up. That little series of coincidences in the spring of 2008 has resulted in my plans to take off for Davos in 2020. Talk about the butterfly effect!

I’ve worked on-and-off with WEF for more than a decade since that initial connection. I joined them in 2008, just one year after its inaugural “Summer Davos” meeting in Dalian, China. With China’s economy growing at a breakneck pace and its geopolitical influence growing, the forum wanted to create a secondary Davos-style meeting focused on Asia, up-and-coming technology and biotech firms, and the future in general. From the very beginning it was aimed at being something much different than the older, more western, more established meeting in Switzerland. WEF called it the “Annual Meeting of New Champions”. 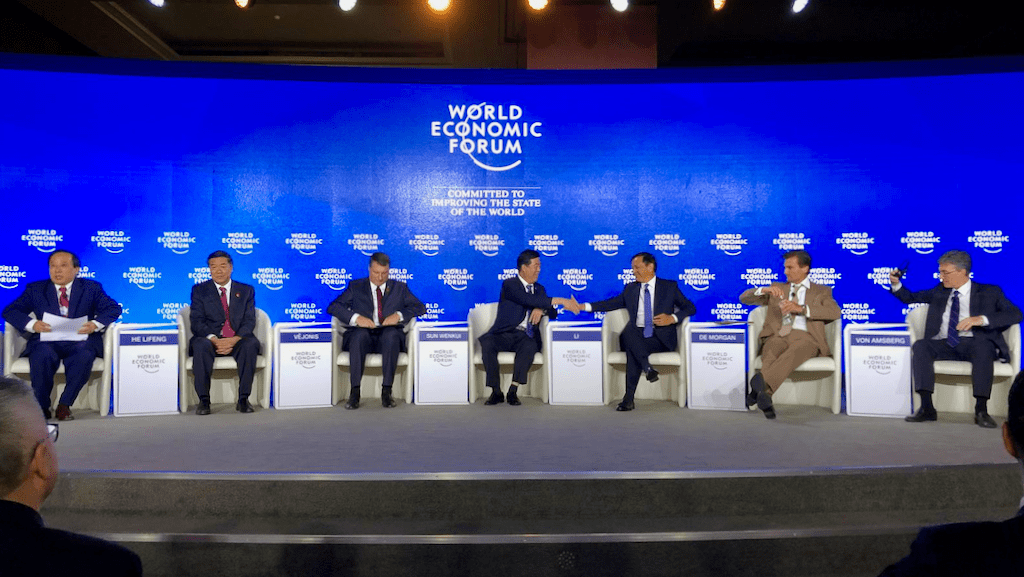 If you haven’t been to any of the WEF’s meetings — and there are a lot of them now, in multiple regions of the world — then you might not appreciate how big these operations are. Holding international conferences with thousands of people from all over the world calls for a lot of staff to make sure everything is covered off. One of those areas is communications: there are so many sessions taking place throughout the multi-day event that it’s impossible for members to attend them all. This is where writers come in; each session needs to be summarized in a clear, comprehensive, yet pithy style that’s distributed across WEF’s many analog and digital channels to both attendees on site and those following the proceedings online.

That meeting in 2008 was the first one I ever attended, and I’ve been to many more since then including the most recent one in Dalian in 2019. I have also helped out with their East Asia meetings in Jakarta in 2015 and Kuala Lumpur in 2016.

The annual meeting in Davos brings together more high-powered individuals than any other meeting in the world. Presidents, prime ministers, CEOs, entrepreneurs, celebrities, and so many more descend on the wintery Swiss ski village to “improve the state of the world.” Usually the meeting is blanketed in media coverage because it involves so many decision-makers all in one place. In fact, in recent years, there has been a backlash to the Davos meeting with some believing it’s a perfect manifestation of the widening global wealth gap. The ultra-rich and government leaders are sipping champagne together in an exclusive Swiss ski village far away from the world’s problems isn’t a good look (to underline this point, there was a cascade of backlash articles prior to last year’s event in Foreign Policy, Bloomberg, The Independent, The Guardian, Associated Press, I could go on). But the meeting persists, with plenty of good coming from it over the years. Most recently, WEF helped boost climate activist Greta Thunberg’s profile in Davos 2019 mere months after her first school strike. She’ll be back again this year).

People sometimes ask me why I bother to attend an elite talk shop rather than do something more exciting, usually with a hint of derision in their voices. Yes, waking up early and drinking bad coffee isn’t as exciting as sailing or catching up on Succession, but it is interesting. I might even call it useful! Conferences have become ubiquitous in recent years, usually focusing on one or two well-known participants to sell tickets but filling out the rest of the panel or speaking spots with B or even C-list participants. WEF, though, is an A-list event. It’s actual government leaders forming breakout groups to come up with solutions to a vexing problem, or multiple CEOs of large multi-nationals discussing how to manage staff and vendors when operating in countries where corruption is rampant. They are real leaders with real problems, and discuss them openly in a real way that’s otherwise rare to see. I usually leave the forum with some new ideas and new insights that I apply to my job or personal life, so I feel incredibly fortunate that I get to attend at all.

I’m never sure which forum meeting will be my last, because life can often get in the way. It’s hard enough to squeeze an entire week out of my schedule, and it’s only getting more difficult as I get older and accrue more responsibilities. That’s why I moved a few mountains in order to make this happen. It’s my first Davos, but also might be my only Davos.

I’d like to see the spectacle, at least once.