The iPhone and iPad have made computers accessible to people all over the world, both young and old. They’ve done away with the mouse and made interacting with apps much more natural, using touch. The result has been an explosion in apps, including some excellent productivity apps for the iPad in particular.

Apple is now trying to take some of that magic and bring it back to the trusty ol’ Mac.

The latest iteration of the Mac operating system, macOS Catalina, rolled out earlier this week alongside several apps making their debut on the Mac. Apple had previously released a new framework to developers called Catalyst, which makes it much easier for developers to take their existing iPad apps and move them to the Mac. The framework, announced in 2018, was met with some early skepticism after the first couple of Catalyst apps, like Apple News and Stocks, didn’t look great on the Mac. In fact, some were concerned that bringing apps designed for a touch interface to a keyboard-and-mouse old school computer might be an awkward fit, making the Mac less streamlined and consistent.

It’s still probably too early to call Catalyst a success, but early returns are looking positive.

As a guy whose life revolves around RSS feeds, seeing Fiery Feeds in the Mac App Store probably got me far more excited than I should be. Someday I will do a deep dive into the combination of Inoreader and Fiery Feeds, which does an excellent job of filtering and tagging important articles. Reeder has traditionally been the standard-bearer for RSS apps on the Mac, with version 4 coming out in April, but the addition of Fiery Feeds and Lire will certainly shake things up. I use Fiery Feeds multiple times a day on my iPad and iPhone, so having everything sync via iCloud and being able to check new articles while on the Mac is huge. 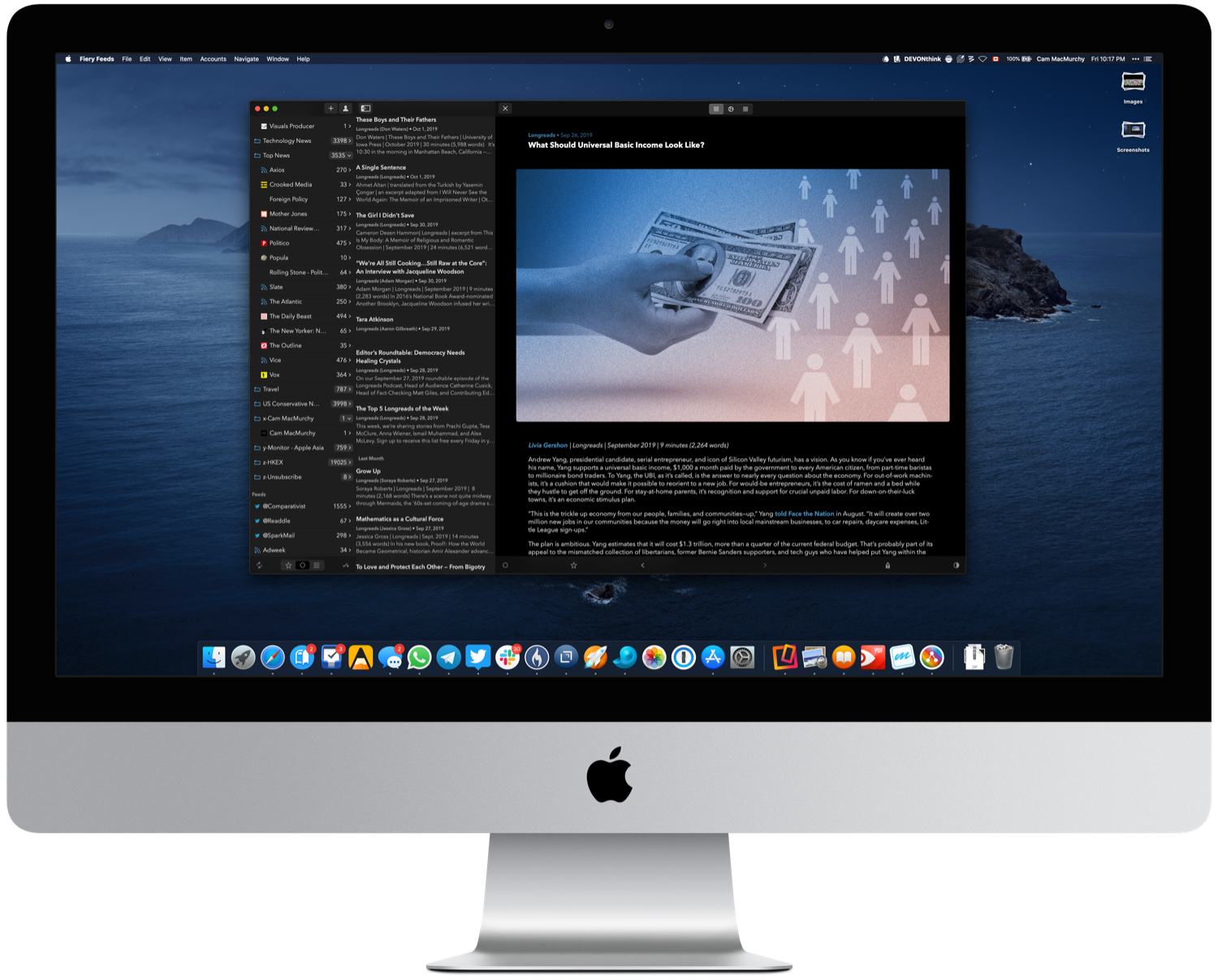 Another app with a big, dedicated user base is TripIt. I began subscribing to TripIt Pro a couple of years ago to help manage travel, and it has generally made keeping flight and hotel information as well as confirmation numbers easily accessible and in one place. I think the app’s UI is a bit dated, but functionally it’s been successful at what it sets out to do.

TripIt’s new Mac app doesn’t bring any surprises, and that’s probably a good thing. It provides all of the same information as the iOS app, but from the desktop.

I have only been testing out Catalyst apps for a few days, and there are still some rough edges that need to be smoothed out. Right clicking is common on the Mac but not on an iPad, obviously, so right clicking sometimes does nothing. I’ve also had each Catalyst app crash on me at least once, so there’s that, too. 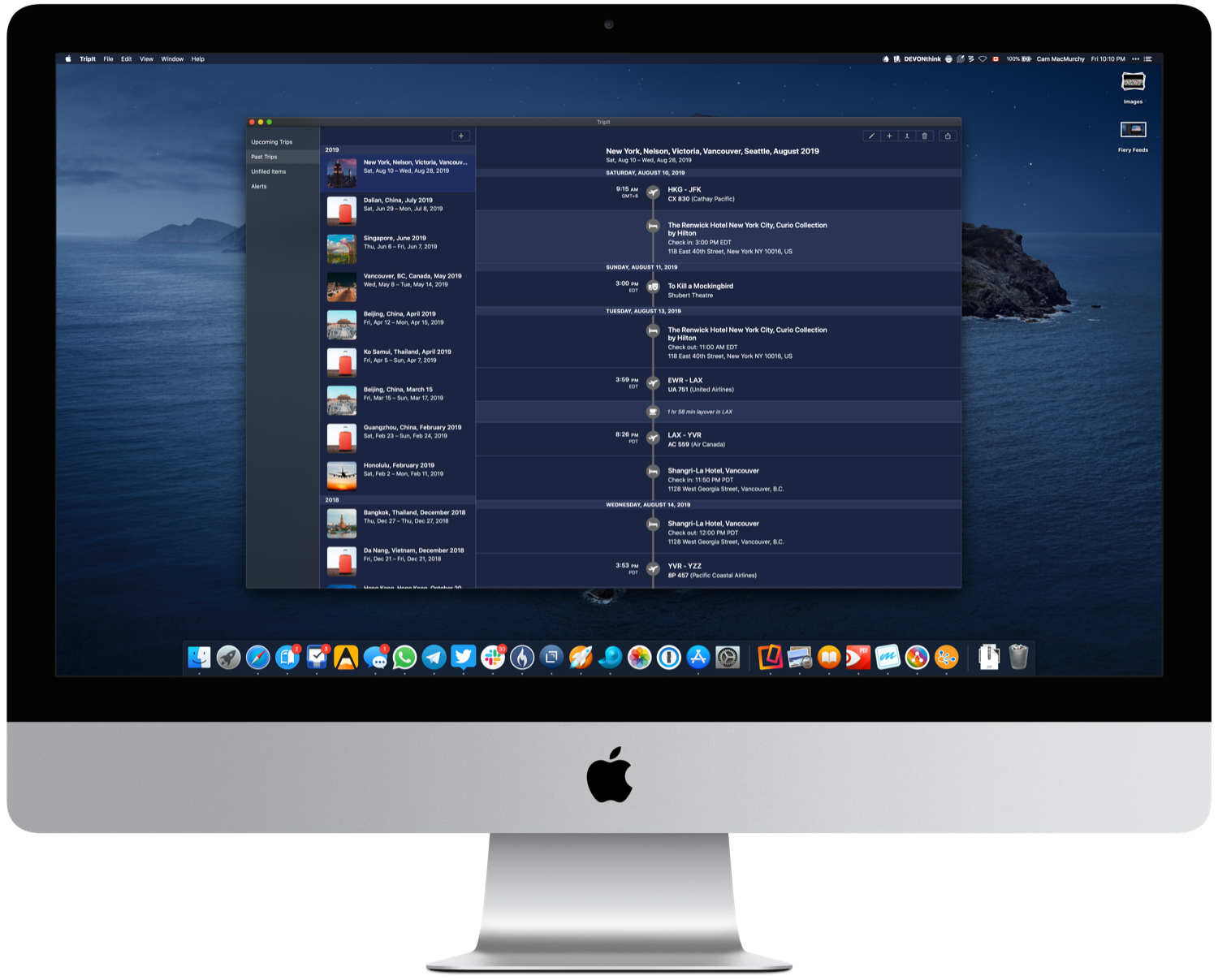 Another thing to consider is the price — some of these apps probably cost more than you would expect. I think it’s high time that developers are compensated fairly for their work, so I have no particular issue with paying higher prices — but it will impact sales, regardless. Cocoacake, the maker of Fiery Feeds, is charging US$34.99 for the Mac app, justifying the price on the company’s blog by saying it’s a one-time cost that will cover the next three to five years of app updates. Lire is listed at $19.99.

I suspect performance issues to be worked out over time as more developers use Catalyst and Apple continues making improvements. Even today, in the early days, it’s encouraging to see so many developers embrace Catalyst and have apps ready on day one. If you want to see if your favorite iPad app is ready for the Mac, you can check this handy list put together by 9to5Mac.

If the launch of these early apps is any indication, it looks like a safe bet that Catalyst will breathe some new life and a bit of excitement into the Mac app ecosystem.

Ulysses makes the right call going for consistency over polish

If you still have doubts over whether racism exists in America, watch this