When it comes to the battle against COVID-19, things in Hong Kong are falling apart fast.

Most of the developed world is reaching a grudging conclusion that SARS-CoV-2 will be with us for a long, long time, and have begun to slowly lift restrictions where appropriate. It’s too early to say the end of the pandemic is near, but at least there is room for optimism.

When COVID-19 first emerged in Wuhan, it caused a serious scare in Asia, where memories of SARS spreading back in 2003 remained fresh. I was in Davos at the World Economic Forum, a few feet away from Hong Kong Chief Executive Carrie Lam, as she explained to CNN’s Fareed Zakaria that Hong Kong’s healthcare system is ready if cases are discovered in the territory. Nobody could have known — sitting there, close together, maskless — that it would be the last in-person Davos for two years and counting. Hong Kong may have been ready for the coronavirus, but the world definitely wasn’t.

Early skeptics, including the US President, dismissed COVID-19 as just “the flu”, which was quickly proven wrong. It was a deadly respiratory disease that resulted in harrowing tales of intubations and people wheezing and gasping for air in emergency wards from New York to Rome. In those days, with no vaccine, a deadly virus, and so much unknown, I sympathized with governments making serious decisions with what little information they had. With data coming in piecemeal, it made sense to implement restrictions to try and keep people safe. The sudden lockdowns across the world marked an extraordinary moment that indicated the seriousness of the threat.

Now, things are different. Safe and effective vaccines have been available in the developed world for the past year, including here in Hong Kong where people can choose between vaccines at no cost. COVID has continued to mutate into the Omicron variant, which is highly contagious but not nearly as severe as Delta for people who are vaccinated. Education about viruses has also improved, with mask-wearing much more common outside of Asia than it ever was before. These are all good things.

Meanwhile, countries that originally opted for a “zero COVID” strategy, like New Zealand, Singapore, Vietnam, and others, are recognizing that permanent border controls and lockdowns can keep viruses out for a while, but take a heavy toll in terms of lost economic activity, jobs, children’s education, and mental health, and are shifting gears. It’s becoming increasingly clear that any benefit from low COVID case numbers – especially as the variant weakens and vaccination rates increase – is not worth that price.

Except here in Hong Kong, apparently. The territory, with its local policies now inextricably linked to national ones, is still aiming to stamp out COVID entirely. The city still has some of the strictest quarantine requirements in the world, with 14 or 21-day mandatory hotel quarantines required for all arrivals, including those who have been vaccinated. (There are some exceptions for visitors from Mainland China, and Nicole Kidman). Restaurants and bars have been closing for dinner at 6pm since January 7, even though the index Omicron case spread during a lunch. Schools are closed, work-from-home orders are in effect for millions of people, and even hamsters have been confiscated and culled following concerns the rodents were spreading the virus to humans. These new restrictions are happening at the same time case numbers continue to rise exponentially, hitting records for multiple days in a row. We don’t need a magnifying glass and compass to discover something here isn’t working.

There’s another thing to consider, too: COVID isn’t going away — not in our lifetimes, anyway. It’s a pathogen, like the flu, that will continue to evolve and mutate and likely be with us for a generation or longer. Reaching “zero COVID” may be an admirable goal, and even do-able for a while, but keeping COVID outside of our borders indefinitely is not only costly, it’s also impossible.

So what’s the end game?

There is only one right answer: finding a way to live with COVID-19. It’s a realization that even countries with some of the most severe restrictions in the world, like New Zealand, have come to.

Shift from the ‘public good’ to personal responsibility

It’s hard these days, in this polarized world of identity politics and Tweets, to be nuanced — but I will try. I am generally in favor of society making concessions for the greater good, especially during times of turmoil and upheaval, of which the initial COVID-19 outbreak would qualify. However, as the pandemic’s dynamics have shifted, so too should our response to it.

Dealing with grandma and grandpa…

In Hong Kong, specifically, we have done well with just over 200 deaths in total since the outbreak of the pandemic. But while our overall vaccination rate is good, one problem persists: our seniors simply don’t want the jab:

Just 19 percent of people age 80 or above have had two shots, and 47 percent of those age 70 to 79 — far behind counterparts in Japan, Singapore, South Korea and other wealthy nations. People age 60 or above accounted for 93 percent of the city’s 213 total deaths and nearly three-quarters of critical cases, official data shows.

There is no question that unvaccinated seniors in Hong Kong are extremely vulnerable to a dangerous, fast-spreading virus, which is a legitimate problem that we should address — but they’ve also had a full year of access to free vaccines. I think we should do what we can to protect them, but we also can’t hold the rest of the city hostage because of their vaccine skepticism. At some point they are going to have to choose between a COVID vaccine and COVID.

I got my booster on January 2, almost the earliest possible date of availability. I always encourage my friends and relatives to get vaccinated, but there are holdouts — like my 85 year old uncle.

While I disagree with him, I love him and respect his decision. I can’t force the vaccine on him, and as an adult he will have to live with any consequences of his choice. When I visited him in Canada in November, I made sure I had received my two jabs and had just taken a COVID test as required when landing in the country. As a family, we do our best to work around his vaccine hesitancy without getting into an argument over it — but it also means accepting reality, and the reality is my uncle faces a high risk of contracting COVID and getting very sick. It’s ultimately his call, though, just like it would be if he chose to eat a Big Mac and large Coke each night for dinner. I wouldn’t like that either.

Ultimately I don’t think it’s moral to, say, keep kids out of school to ensure my vaccine-skeptic uncle stays safe. He’s a grown man and can make his own choices, even if they seem foolish to others.

One thing we know – for sure – is that vaccines are helpful. They don’t prevent contracting COVID, they don’t prevent a person spreading it, and they don’t even guarantee against illness and death — but they help a lot. In fact, if you’re vaccinated and under 65, you’re more likely to die from a lightning strike.

Open up for the vaccinated

The availability of free and effective vaccines in the developed world is an incredible scientific achievement and people should be incentivized to get vaccinated the way governments incentivize people to eat healthy or exercise. It’s just the right thing to do, like eating broccoli. Right now, though, there are no incentives in Hong Kong: the vaccinated are subject to the same long hotel quarantine periods, the threat of being taken to a government facility after a positive test, and all other restrictions in the territory. Without incentives, it’s not a complete surprise that our vaccination rate rose much slower than similar-sized economies.

That said, I haven’t entirely come to terms with federal vaccine mandates quite yet, as there’s something about government edicts to inject something into your body makes me uneasy. Regardless, people who get vaccinated to protect themselves, their families, and the community should have broader access to public gatherings and other benefits.

I have repeatedly – and just now, while writing this – had contacts tell me they are more scared of being sent to a government quarantine facility than contracting COVID. This is a problem, because it disincentivizes testing and reporting. If people test positive for COVID at home, and have few or no symptoms, they are incentivized to tell no-one and isolate at home instead. Systems that have backwards incentive structures tend to fail.

We also know that while COVID can, and has, killed people at all ages and backgrounds, there are certain groups that have a much higher risk of serious illness and death — yet in many countries and regions, including Hong Kong, we treat everyone the same.

None other than Maria Van Kerkhove from the World Health Organization admitted that Omicron is particularly dangerous for people that fit a certain profile:

“We are learning that people with underlying conditions, people with advanced age, people who are unvaccinated can have a severe form of COVID-19 following infection from Omicron.”

We need to protect people with these underlying conditions as much as we can, but there’s a limit. At the moment, we are actually harming the greater good for the sake of a few — a few that have other options to protect themselves.

We don’t protect people at risk of diabetes by banning French fries, nor should we protect seniors by closing bars and schools.

Ultimately we need to strike a balance between a community effort to protect each other and personal responsibility. Hong Kong’s current path is causing pain, hardship, economic loss, and trauma across the territory, and it’s time to stop. We have neither the authoritarian and legal capability to conduct Mainland China-style city-wide lockdowns, nor the common sense and responsive government needed to develop a workable plan out of an admittedly difficult situation.

In the end, we all end up losing. 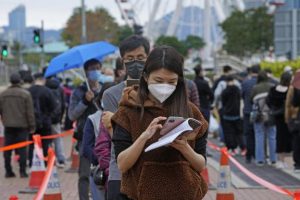 PrevIf we can’t ban cold calls outright, this might be the next best thing
Birds aren’t realNext